Women's History: Women in the Arts

Books About The Artists 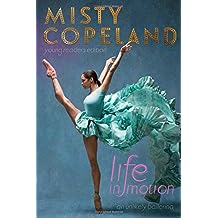 Life in Motion: An Unlikely Ballerina

Acclaimed ballerina Misty Copeland is the first African-American performer to be appointed as a principal dancer for American Ballet Theatre.

Among the great American artists of the 20th-century, Georgia O’Keeffe stands as one of the most compelling. For nearly a century, O’Keeffe’s representations of the beauty of the American landscape were a brave counterpoint to the chaotic images embraced by the art world. Her cityscapes and still lifes filled the canvas with wild energy that gained her a following among the critics as well as the public. Though she has had many imitators, no one since has been able to paint with such intimacy and stark precision.

More Books About the Artists

Other Arts by Women

Recordings by women fill the archives of Smithsonian Folkways, but we shouldn't take them for granted. Gender discrimination and gender segregation have posed considerable barriers to women's musical talent. Still, many women musicians around the world challenge traditionally held beliefs about gender and women's social status simply by playing a certain instrument or singing a certain song.