Fascism/Falangismo and Their Legacies in Spain, Italy and Germany: Franco and the Spanish Civil War 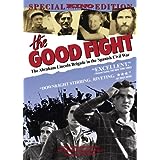 This documentary examines the experiences of the Abraham Lincoln Brigade, using interviews with survivors more than 50 years later. First, the film sets the context with the rise of Fascism. Then, in 1936, Spain's military revolts against the elected government, and the U.S. and Europe agree not to intervene. In response, volunteers snuck past border guards into Spain to fight with the Republicans. The men and women veterans describe the perils of reaching Spain, limited training, responsibilities of command thrust on the very young, deprivations of a soldier's life, lack of matériel, horrible rates of casualties, and ultimate vindication at the end of World War II.