Calligrapher Diane von Arx in the basement studio of her Minneapolis home.

Diane von Arx grew up as a tomboy on a farm in LaCrescent, but she soon learned that her hands were good at doing more than just chores.

In high school, girls would ask me to put the names of their boyfriends on their folders, in a calligraphic style, and then fill in the lines. The nuns were so taken with my talent that they gave me a speedball textbook that lettering artists use, plus pens and poster board to make posters.

Von Arx's career as a professional calligrapher took her from decorating her friends' folders to designing the graphics for General Mills' "Count Chocula" cereal, to lettering official documents and decrees. And now it's led her to illuminating one of the most important texts of our time - the Saint John's Bible.

To help you understand the importance of the Saint John's Bible, here are a few rather stunning facts:

- The bible is being written by hand and illustrated by a team of calligraphers and artists; this is a project that has not been undertaken in oh, about 500 years.

- The Saint John's Bible is separated into seven volumes, each two feet by three feet in size. Once completed, each bound volume will weigh as much as 35 pounds, with a combined weight of more than 165 pounds.

- The illumination of the bible began in 2000; if it stays on schedule, it will be finished next fall. That's eleven years of work.

- Pope Benedict XVI, upon seeing a completed volume of the Saint John's Bible, called it "a work for eternity."

Pope Benedict XVI pages through the Wisdom volume of The St. Peter Apostles Edition of The Saint John's Bible in April 2008. (L'Osservatore Romano)

I was ecstatic, honored - I would think this is a job that pretty much any calligrapher would die to be a part of it, just because of the nature of the project and the legacy. It's going to last a very long time, and will be around long after we're gone. Along with all this excitement and this honor, there was also this sense of "oh my God now I have to do this."

Tim Ternes is director of exhibition and programming for The Saint John's Bible and the Hill Museum & Manuscript Library. He explains the illumination of the Bible was calligrapher Donald Jackson's idea. Jackson is Senior Scribe to her Royal Majesty's Crown Office, a.k.a. "The Queen's Calligrapher." For Jackson, illuminating the bible was a life's goal. He approached Saint John's about the project in 1998, and they agreed to sponsor it.

Don is considered by most to be the worlds foremost western scribe, and he's gathered together his A-Team. Donald wanted to make sure that there was a Midwestern touch - he's based in Wales and has done much of the work there. For Diane to be recognized in this way is really important. This is a once in a millennium project.

In addition to von Arx's illumination, the bible also features depictions of nature unique to Stearns County, Minnesota, and references buildings from the Saint John's campus.

The Saint John's Bible is written on vellum, or calfskin. So when it was von Arx's time to add her mark, the vellum pages were shipped to her, with most of the writing already done. She was given her words and her space to fill.

Before writing on the pages I had to stretch them out - it was fall, it was dry, and vellum doesn't like dry - it likes moisture and humidity. As Donald Jackson likes to say "that vellum forever wants to get back on the calf - that's its job." So I cranked the shower in the bathroom 'til the sheets were pliable, then put the vellum on my counter while it was still moist and stapled it to a sheet of coated plywood.

If the Pope only knew...

Von Arx created sketches, sent photographs of them to Jackson in Wales, and then they would chat about the ideas. Von Arx says it felt like an apprenticeship, with Jackson giving her a sense of direction but no explicit orders. She says she felt she had to do the best job that she could, and then take it up a notch further.

While the Bible is an ancient text, the Saint John's Bible is being created for the modern age. Images include strands of DNA running through parts of the gospels, views from the Hubble telescope, scenes from Auschwitz and Rwanda. Von Arx says she finds the artwork compelling.

I think it is absolutely appropriate. I'm just blown away every time a new volume is released.It goes far beyond the literal, and creates layers of meaning. I think each person, when they look at them, brings something different. It makes people think.

Tim Ternes agrees; he says the Saint John's Bible is meant to give the viewer something to think about without telling them what it means, or what it's supposed to mean.

We'd like to see the St. John's Bible become a spark for a really high quality visual bible study - this can unite imaginations. What excites me is this notion of the Bible truly being communal. It is one of the very few things in the religious world that's received such support on both ends of the conservative and liberal spectrum. This invites discussion and dialogue among traditions.

Ternes is hoping the Saint John's Bible will serve as a source of inspiration for thousands of years to come.

Put it into the context of the Dead Sea Scrolls: they've lasted centuries, without any real protection, and we'd like this book to last at least two or three thousand years [by using ancient bookbinding techniques]. We're not trying to recreate history, but there's simply no better method to create a work that lasts.

Calligrapher Diane von Arx says she's only recently begun to appreciate the value of her hands, and the work they can do.

For Diane von Arx, the idea of her work being around for not just hundreds, butthousands of years is a humbling one.

I don't have kids - this is the only creative thing that I've done that will live far beyond me. My part in it may have been relatively small, but it's going to last for a very long time. It's a calligraphic legacy for our time. 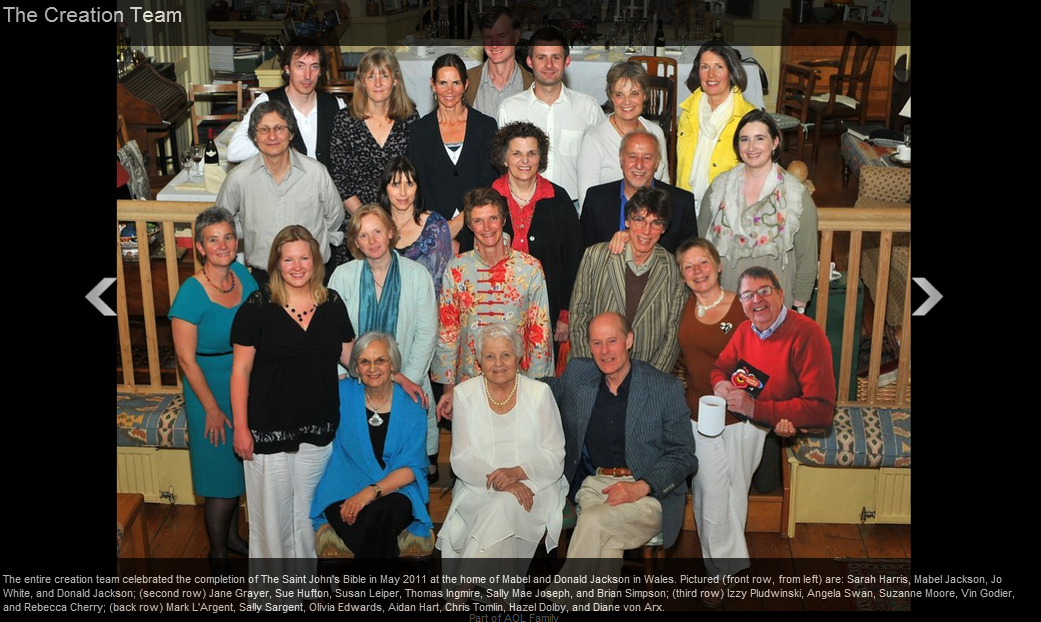 Library of Congress: Illuminating the Word