"to ignite the imagination, glorify God’s word, revive tradition, discover history, foster the arts, and give voice to the voiceless".

Remarks by Michael Patella, OSB offered at the presentation of the Saint John's Bible at Yale University, May 2, 2012.

How did we get to this point that one of the greatest and one of the most forward-thinking universities of the western hemisphere would be installing a rendition of a handwritten Bible in its Divinity School, 500 years after the quill pen became obsolete, and at least twenty years after the whole Bible in all its ancient and modern languages could be accessed on a computer in less than four seconds?  How did it happen, and why did it happen?  First the how. 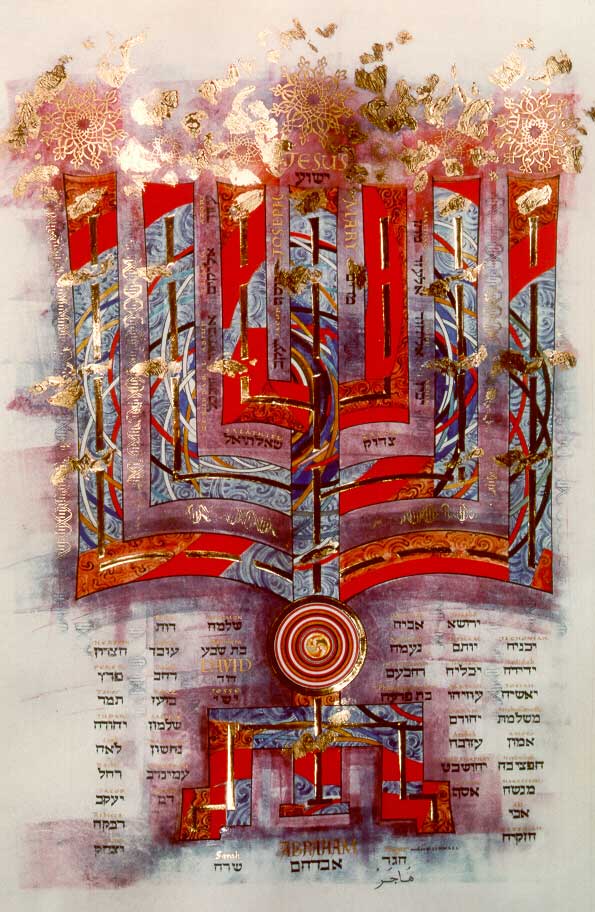 From the Saint John’s side of things, the decision came when two tangents intersected.  The first tangent:  If you are able to recall the days leading up to the year 2000, many institutions, particularly religious institutions, were working on ways to commemorate the turn of the millennium.  Saint John’s Abbey and University were no different in this regard.  Many ideas were considered, but none were making much headway.  If there were agreement on any point, it was that whatever we did, it had both to have lasting value and not provide yet another obstacle for the grounds crew to mow around.

The second tangent begins more than a decade before the first.  In summer 1980, the Society of Calligraphers came to Saint John’s Abbey for their annual conference, and they invited Donald Jackson, the calligrapher to Her Majesty, Queen Elizabeth, to give some masters classes.  It was that event which introduced Jackson and many of the monks to each other.  In that same summer, Jackson was a guest on the Today Show, and in a response to a question, he expressed his wish to handwrite a Bible during his lifetime.

Fast forward to late spring of 1996: Donald Jackson was in Chicago, and he met up for lunch with a monk, Fr Eric Hollas.  Jackson asked what we were planning to do for the millennium, and at some point interjected, “Have you given any thought to sponsoring me to write the Bible?”  Fr Eric brought the matter to then president of the university, Br Dietrich Reinhart, who brought into the conversation then Abbot Timothy Kelly.  Both men were captivated by the idea, and both had a reputation for being shakers and movers.   And they both smelled a millennium project; the two tangents intersected.

Anyone familiar with how institutions move knows, however, it is not as simple as that.  Since this was to be a joint venture, Br Dietrich and Abbot Timothy had to get approval from both the university regents and the monastic chapter.  Yet they both knew that the regents would not vote for it unless monks did, and the monks would not back it unless the regents did.  In order to break the impasse, the two of them turned to the ones all great people turn to when things look impossible…the theologians.

So, in July 1996, a group of the faculty from School of Theology•Seminary met with Donald Jackson in the university’s Hill Museum and Manuscript Library to discuss the matter.  A sizeable number thought it interesting and liked the idea, but we all were pretty adamant that if the abbey and university wanted our support, this illuminated Bible would have to be a Bible for the new millennium, not a nostalgic or antiquarian romp through Christian art history.  Sufficiently satisfied with the proposal on theological and educational grounds, the regents and monastic chapter voted within a month of each other to go ahead with the project.  That is the how; now the why.

The theologians did not need much evidence to convince them that the world, particularly the United States, needed a better way to read and understand the Bible.  Although we did not know where it would lead, we certainly thought that greater reference to art and imagery would certainly help to provide a visible alternative to the rampant fundamentalism consuming the landscape, and that there was no better time to start than at the new millennium.

The task force morphed into the Committee on Illumination and Texts (CIT) which was given the responsibility of overseeing the theological content of the project, a job that involved selecting those passages for illumination and the degree to which they would be illuminated.

We were given a formula based on the number of working days it would take Donald Jackson to complete an image set against the number of working days in his contract.  Thus, a full page illumination would take 20 days, half-page 10 days, and so on.   With Fr David Cotter representing the Old Testament, and I the New Testament, we went through the whole Bible and wrote a schema of what passages to include according to the criteria of the project plan.  We brought our work to the rest of the CIT.  With little emendation, they adopted what we had prepared. 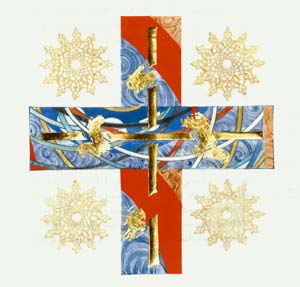 The whole committee then went through each piece of the schema to compose a Brief for each of the seven volumes, so that our thoughts could fuel and inspire the imaginations of the artists.  In order to give shape and comprehensibility to the Brief, we used four categories to frame our discussion:

•local associations (to Minnesota, the Abbey, and the University)

Donald Jackson would send back some sketches, we would offer a critique, and eventually sign off on the image.  We followed this process to the very end.

That is where Saint John’s ends and where Yale begins.  Why Yale?  The Heritage Edition we see here before us might loosely be called a facsimile, but in reality it is not.  In order to maintain the living quality of the Word of God, each volume has been reworked so that the gold and embossing will evoke as closely as possible the same degree of beauty and excitement as the original.  Each page of the Heritage Edition is custom made by the artist.  How important that beauty and excitement are for a place like Yale Divinity School!  After all, this is the place that gave the world the RSV.

Let’s recall the goals of the project plan: to ignite the imagination, glorify God’s word, revive tradition, discover history, foster the arts, and give voice to the voiceless.  There are few if any better places on earth for this kind of activity to take place than Yale.  In the hands of this Divinity school and the Institute of Sacred Music, this Bible will be the ready source of inspiration that the Bible has been for many throughout history.  Let it inspire new forms of biblical exegesis.  Let it excite the imagination.  Let it fertilize the faith life of faculty and students.  Let it be a focal point of ecumenism.  Let it move ministers to good pastoral practice.   Let it inspire music and dance.  Moreover, let it be the vehicle for connecting with your colleagues in the undergraduate college, in the schools of architecture, drama, art, and forestry and environmental studies.  Theology is the discipline that can draw from and contribute to them all.

One of the images from the Acts of the Apostles is succinctly entitled, “To the ends of the Earth.”  It is an image coinciding with the Christ’s mandate in Acts 1:8 and reprised in Acts 13:47.  “…and you will be my witnesses in Jerusalem, in all Judea and Samaria, and to the ends of the earth” (Act 1:8).  The image itself, however, is set at Act 28, the last page of the volume, and it is based on that famous photo from Apollo 8, which showed the earth rise from the perspective of the moon, Christmas Eve, December 1968. With this Bible inspiring its corporate and individual imaginations, let Yale Divinity School bring the message of salvation to the ends of the earth.   Why Yale?  It is a natural fit!

Fr. Michael Patella, OSB, acted as the chair of Committee on Illumination and Text for The Saint John’s Bible.  A Benedictine monk of Saint John’s Abbey in Collegeville, Minnesota, he is a professor of New Testament and teaches in both the undergraduate theology department and the graduate School of Theology•Seminary at Saint John's University, where he serves as seminary rector and as director of the school’s Holy Land Studies Program.  A member of the Catholic Biblical Association, Fr. Michael is a Visiting Research Fellow at YDS during the 2011-2012 academic year.