From Encyclopedia of World Biography

The English cardinal and theologian John Henry Newman (1801-1890) was a leading figure in the Oxford movement. After his conversion to Rome, his qualities of mind and literary style won him a position of respect among English intellectuals and theologians.

John Henry Newman was born in London on Feb. 21, 1801. His father was a banker of Evangelical religious beliefs. At the age of 15 Newman experienced a religious "conversion" that was the foundation of his lifelong intense faith in God. In 1816 he matriculated at Trinity College, Oxford, from which he graduated in 1821. Having determined upon taking Holy Orders, he applied for a fellowship at Oriel College, to which he was elected in 1822. There Newman came under the influence of Richard Whately and the "Oriel Noetics," who taught a strict logical approach to religious faith. To them he was indebted for his skill in analysis and argument. In 1824 he was ordained and became curate of St. Clement's, Oxford. In 1826 Newman was appointed public tutor of Oriel and 2 years later became vicar of St. Mary's, Oxford. During this time he had separated from the Noetics in matters of doctrine and had come under the Anglo-Catholic influence of Hurrell Froude and John Keble. He had also begun his studies in the history and doctrine of the early Church. In 1832 Newman resigned his office and went on a tour of the Mediterranean with Froude. During the trip he wrote most of the Lyra apostolica and the hymn "Lead, Kindly Light."

Newman returned to England in July 1833. On July 14 Keble preached at Oxford his famous sermon "National Apostasy" against the Whigs who were seeking to dis-establish the Church. This sermon is regarded as the inauguration of the Oxford movement. Its organization dates from a meeting later that month of Froude and others at the 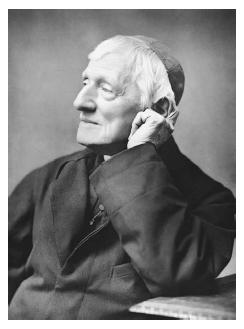 Hadleigh vicarage of H.J. Rose, editor of the British Magazine. They determined to initiate a fight for the doctrine of apostolic succession and for the integrity of the Prayer Book. Several weeks later Newman independently began to publish his Tracts for the Times, which gave to the movement the alternate name of tractarianism.

The aims of the Oxford movement were to combat the influence of the state over the Church and to establish a foundation of doctrine for the Church of England by teaching its descent from the early Church and its Catholic traditions. Newman complemented the tracts with his celebrated Sunday afternoon sermons delivered in St. Mary's, which attracted many followers and admirers.

Newman's influence was at its height by the end of the 1830s, though opposition was gathering to the "Romish" tendencies of the movement. However, he himself was at first firmly committed to the notion of the Anglican Church as a via media—in the positive sense of keeping a path of truth between erroneous extremes. But, gradually, by 1839 he had begun to doubt the strength of the Anglican position, noting a resemblance between Anglicanism and certain heresies of the early Church. Newman's Tract XC, published in 1841, showed the tide of his feelings. In order to "test the tenability of all Catholic doctrine within the Church of England," he examined the Thirty-nine Articles to show that they had been directed not against the Roman Catholic position but only against popular errors and exaggeration. The tract aroused a storm of controversy and the bishop of Oxford ordered the series suspended.

In 1842 Newman retired to his dependent chapel at Littlemore and spent the following 3 years in prayer and study. During this time he wrote his Essay on the Development of Christian Doctrine, which expounded the principle by which he reconciled himself to later accretions in the Roman creed. In 1843 he formally recanted all his criticism of the Roman Catholic Church and resigned the living of St. Mary's. Two years later he was received into the Roman Catholic Church.

In 1846 Newman went to Rome and was ordained a priest. He joined the Oratorian order, and he returned to England to found the Oratory at Edgbaston near Birmingham, and later the London Oratory. The next years were difficult for him as he could find no secure position, being distrusted by English Protestants and Roman Catholics alike. He delivered a brilliant series of lectures, The Idea of a University, setting forth his humane ideas of education.

In 1864 Newman's opportunity for self-justification arrived. His veracity had been incidentally slighted in an article by Charles Kingsley in Macmillan's Magazine. In reply Newman wrote the Apologia pro vita sua, an autobiographical account of his religious development and opinions. The directness and honesty of the work vindicated the author's integrity and restored him to public favor. In 1870 he published The Grammar of Assent, in which he argued the psychological validity of faith against the rational approach

to religious truth. In 1878 Newman was made an honorary fellow of Trinity College, Oxford, and the following year he was created a cardinal. He died, much loved and revered, on Aug. 11, 1890.

The standard biographical works are Anne Mozely, ed., Letters and Correspondence of John Henry Newman during His Life in the English Church, with a Brief Autobiography (2 vols., 1891), and Wilfrid Ward, The Life of John Henry, Cardinal Newman (2 vols., 1912). To these may be added Meriol Trevor, Newman: Light in Winter (1962) and Newman: The Pillar of the Cloud (1962). The best introduction to Newman's work as a whole is Charles F. Harrold, John Henry Newman: An Expository and Critical Study of His Mind, Thought, and Art (1945). An excellent introduction to Newman's theory of education is A. Dwight Culler, The Imperial Intellect (1955).