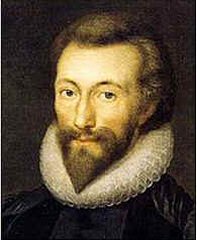 (born c. Jan. 24-June 19, 1572, London, Eng.-died March 31, 1631, London) English poet. Donne was born into a Roman Catholic family. He entered the University of Oxford at age 12; he later transferred to the University of Cambridge and subsequently studied law. An adventurer in youth, he hoped for a high public appointment, but his clandestine marriage to his employer's daughter ruined his prospects. He converted to Anglicanism; ordained in 1615, he became a preacher of great power and eloquence and was installed as dean of St. Paul's Cathedral in 1621. The greatest of the English Metaphysical poets (seeMetaphysical poetry), he is noted for his love lyrics, religious verse and treatises, and sermons. His secular poetry, most written early in his career, is direct, intense, brilliantly witty, and daringly imaginative. Later his tone darkened with works such as theAnniversaries (1611-12), two long poems meditating on the decay of the world. His 19 famous Holy Sonnets (written 1607-13) were published posthumously. Among his prose works, many as dramatic and intimate as his poetry, the most enduring isDevotions upon Emergent Occasions (1624).

1612    Of the Progress of the Soule: The Second Anniversary

1633    Juvenilia: Or, Certaine Paradoxes and Problemes

1651    Letters to Severall Persons of Honour